Synopsis and other thoughts:

It is about the journey of three main characters (amongst others): Bliss, a domestic cat and her elderly owners Mr and Mrs Hobnob. Bliss gets lost and has to learn to fend for herself in the wild, whilst the Hobnobs need to move out of the past. It is about two kinds of survival; Bliss and her struggle in the wilderness and her dangerous encounters with the agricultural industry, the Hobnobs quest to stay alive whilst playing their roles in an increasingly modern and alienating world…

It's a story of love, and a parody on modern living.
This is a new take on previous comic trends, with an environmental slant. 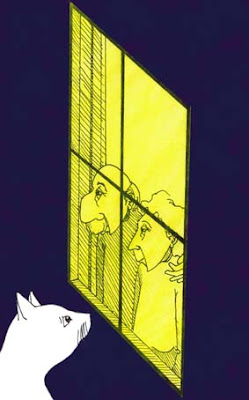 I have had some distance from it now. I am glad I kept up the momentum after the M.A. at least to get the first episode done, otherwise I would have strayed toward other attractions...kind of like a self imposed post M.A. probation period, I have had to behave myself. Having the studio has been fantastic, a real motivating aspect to the process. Now things can cool down a bit. Good.

Things are evolving beyond the zine/style comic book, and I have thoughts beyond them. What with bad press about super heroes, and the need to save the day etc...this has no bearing on how the form can fly as does the literary novel. The situation is excitingly open yet naturally tentative. To think of any recent and regarded works...(books and DVD's that I have found in the childrens section of Foyles, Waterstones and (the once) Borders books shops), I would choose Shaun Tan's 'The Arrival' and also Sylvian Chomet's animation work as an inspiration...especially Beleville rendezvous...they use no words. French comic artist Jean Giraud Moebius, is genius, I like the work of (Finish) Tove Jansson: The Moomins and am further intrigued by her wider evolution into literary works much later on in her life.

When drawing up the outline to the story of Domestic Bliss, I added words at the very end of my process. Actually, I started with a substantial story outline that I had written out, that felt like a blockage, but gave structure. Then it all disseminated into visual interpretation rather like interpreting a play text and creating a design. Then words left completely for a very long period as I felt my way through visually, until the tip of the very end like a cherry. Preserving the interpretive aspect of the visual, it's volatile nature contained by the essential mast of words. Words acting like pegged guide ropes to a tent...if they come loose, it does fly yes... but in a blind flat spin.

All within the parameters of me and my drawing board which is very enjoyable, and keeps me out of mischief as it were. My knitting...

It has been great to tackle fiction from a graphic novel angle, now I feel I am shifting something from my own system, I will make some comments about these images below by Shaun Tan: 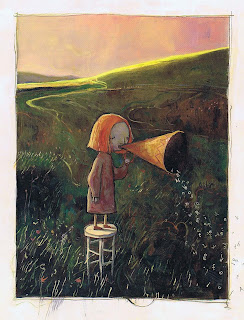 Image details: I am struck by the atmosphere in this illustration, and indeed it's impact. It is from a children's book by Shaun Tan: "The Red Tree". 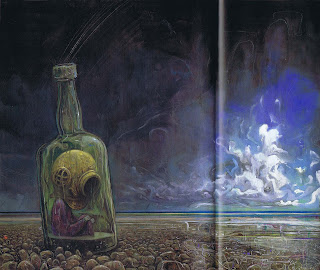 This one: Though I feel this is a simply stunning illustration...

When seen in isolation from the whole sequence, the interpretations can be numerous...like witnessing snap-shots in real life that can so easily be misunderstood. But the book takes one on a 'reassuring' journey, the poor powerless girl does get out of the bottle, and what an incredibly effective way of summarising feeling...A children's book about depression!

(Insert Dec 2010) But the story is also about keeping faith in those small good things, represented by a little red tree sapling that you can't see very obviously, but is always there on each page throughout until the end when the problem has shifted....A kind of horror children's book for adults too...all those adults out there who had to grow up really fast. There are about twenty words in total throughout the whole book...I reckon psychotherapists must have this on their reading list too!

To see all pictures at their larger original size, click on the image once for the light-box viewer. The two Shaun Tan Illustrations were found on Google image search, and before that, I do not know of their origin. With thanks.
Posted by Gwen Linnell Turner at 13:56