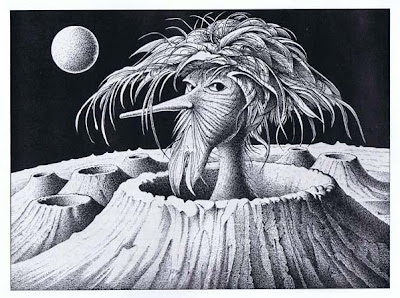 I am looking through a wonderfully illustrated book that my brother and his girlfriend Anna kindly sent me from Berlin: Zeidler, Fabelwessen (I don't speak German) but these illustrations certainly speak to me today, they are great. Above, I share one illustration that I particularly like...

To quote Anna: "Zeidler has published a lot and is well known in Germany. "Fabelwesen" is a term I cannot easily translate. It describes creatures who sprang from imagination or whose existence is (so far at least) debatable. Mythological creatures, "half-creatures" like unicorns, monsters, goblins and so on. It is a rather old-fashioned term, reminiscent of fairy tales. Traditionally, you would find illustrations of these in a so-called "Bestiarum". We have some beautiful examples of illuminated manuscripts (in the Berlin collection of prints and drawings (Kupferstichkabinett)".
Anna Schultz currently works at Kupferstichkabinett in Berlin, and when in England; The Paragon Press with Charles Booth Clibborn, and The British Museum. My brother Simon Turner is a specialist in both the etcher and print maker Hollar, and previously van Dyck, a leading English court painter, both of whom lived during the 17th century. He is Compiler and editor at Holstein, and also has a history at The British Museum.

To see all pictures at their larger original size, click on the image once for the light-box viewer.

Posted by Gwen Linnell Turner at 04:46