A whole host of Valentines snogs...

Phew! This has got to be the longest snog in recorded history, spanning some of the worst of this wintery frost! On Valentines Day, the snogging will finally end at a most sweetest point. (I was rather enjoying it, but my characters are complaining if achy lips).

So many have said that the design is suitable for Valentines too, so I thought I would adapt accordingly. I won’t change the Christmas snog because I believe that winter is a time for the most snogging ever! They have now reached a satisfactory point in their evolution over the last two years and the spirit of them is now ready to be unleashed into the more volatile world of LOVE. 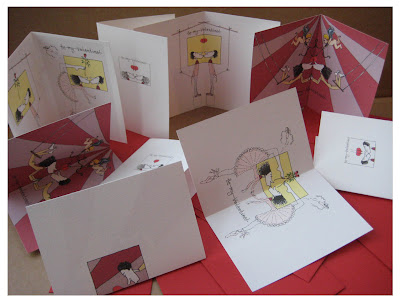 (Because it isn’t really worth OUCH! selling just one online, each time...you can trust that OUCH! won’t tell anyone if you buy a pack of three!!!)

Take a look here at OUCH! for the grand new collection!